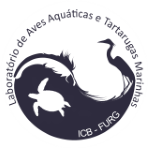 The Ornithology Collection of the Federal University of Rio Grande, known by the acronym CAFURG – ‘Coleção de Aves da Universidade Federal do Rio Grande’, began in the late 1970s by Prof. Carolus Maria Vooren. This pioneering phase of the bird collection focused on coastal and marine species sampling. Its main goal was to prepare the fur for scientific studies and its use in curricular teaching activities at this university. As a second stage, starting in 2011, the collection started to be headed by Prof. Dr. Leandro Bugoni. In this phase, the emphasis was turned on the scientific and didactic use of birds passively donated to the university by the passive via, i.e., specimens found dead. With the efforts of students and professionals, the bird collection was revised and improved, which made it gradually increases. Fortunately, in 2020 the entire bird collection was moved to a new building, projected specifically to scientific collections, enabling better conservation of the material: The CBS/FURG or Subtropical Biodiversity Center – ‘Centro de Biodiversidade Subtropical’. Current activities include taxidermy and curation. The CAFURG has as mote the preparing and storing of specimens, aiming the access and keep of complete information each specimen. As a short-term goal, the CAFURG aims to improve the digital access of information as a digital biological collection, allowing better visibility of our specimens and diversity of birds.

The collection comprises mainly skins, skeletons, frozen tissues, feathers, liquid specimens, and a small egg reference collection (donated by Dr. Aldo Sedez). We are use modern protocols, following the best ornithology collections worldwide. Besides the collection, CAFURG also has skins and skeletons for teach activities. The CAFURG is one of the most important ornithological collections maintained by public universities of the country, the second largest collection among universities of the Rio Grande do Sul state. It is also one of the most important collections of marine and aquatic birds in Brazil, perhaps the most representative in these groups of birds. It has a total of 1200 vouchers until April 2020 (available Table; PDF). The skin collection is the largest one, with 952 specimens, and together with the osteological collection (198 specimens), represents a very useful material for taxonomic and phylogenetic bird studies. The frozen tissue collection (750) is increasing in importance for researches including stable isotopes, for trophic ecology investigation, contaminants, and population genetics. Finally, the liquid collection (whole specimens, gizzard, stomach contents, intestine, kidney, liver, heart, gonads, syrinx, endo, and ectoparasites) is the base material for investigations on histology, diet, plastic debris ingestion, and contamination.

The ornithological collection includes 217 species. The best geographical representation of species is from Pampa Biome, and the southernmost Brazil, with emphasis on birds associated with aquatic, marine (pelagic), and coastal environments, as well as the Brazilian coast and islands. Since 2018 the collection includes taxa from southeast Brazil, mainly associated with mangroves and other coastal environments from Espirito Santo state.

In the South American context, we highlight the collection the albatrosses (Diomedeidae) and petrels (Procellaridae), herons (Ardeidae), shorebirds (Charadriidae and Scolopacidae), and the gulls and terns (Laridae). Among the species with the most numerous collected series, we have Magellanic Penguin [81] (Spheniscus magellanicus), Manx Shearwater [47] (Puffinus puffinus), Yellow-nosed Albatross [30] (Thalassarche chlororhynchos), Black-browed Albatross [25] (T. melanophris), Red Knot [35] (Calidris canutus rufa), Giant Wood-Rail [21] (Aramides ypecaha), and the Great Horned Owl [21] (Bubo virgianianus). The contribution of more representative series of some species is through specific research projects, carried by undergraduate and graduate students, and postdoctoral fellows, as well as by the targeting for the monitoring of beaches and roads projects. The collaboration with managers from ‘Estação Ecológica do Taim’, and from ‘Centro de Reabilitação de Animais Marinhos do Rio Grande’ – CRAM, have a relevant role for the composition of species of the current collection.

Rare specimens from Brazil, such as the only Brazilian skin of the Broad-billed Prion (Pachyptila vittata), the Magellanic Diving-Petrel (Pelecanoides magellani), the Great-winged Petrel (Pterodroma macroptera), and the Gray Petrel (Procellaria cinerea), or even of global interest species, such as Trindade Petrel (Pterodroma arminjoniana) are among the specimens deposited at CAFURG.

"The bird collection from FURG provides basic knowledge about bird biodiversity, fomenting research development, and staff training. It also plays an important role in environmental management and conservation policies. The collection itself, as well as the knowledge provided from it, are extremely great importance for the scientific divulgation of the University. Through paper citation in international journals and reports of the material examined and housed in the collection in each new scientific publishing, CAFURG will be better known, assuming an important role in the scientific community".